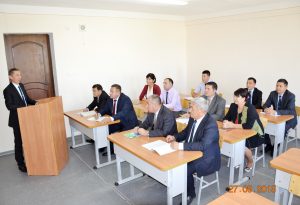 The department of Ozbek filology was founded in 1974 in order to train specialist at Karakalpak state University, at the beginning the students were tought on economical aid social subjects by assistant professor A.Madaminov and X.Abdullayev.

In 2015, Uzbek philology department was divided into Uzbek linguistics and Uzbek language and literature departments. For the long time, the department of Ozbek language has connected with some other higher support educational instituts in order to train scientific and scientific-pedagogical specialists. Practically, the connection of the institution of language and literature named after A.Navoi is effecting considerably.

In 2001-2004 one of the department’s professors Shuhrat Abdullaev studied at the post graduateon of institution and could managed to take doctoral degree of philology.

Up to this days 2 textbooks, 4 monographs, wore than 20 study handbooks and more than 250 scientific articles have been published. Nowadays, 9 professors work at the department.

Four of them are scientific candidate and assistant professor.