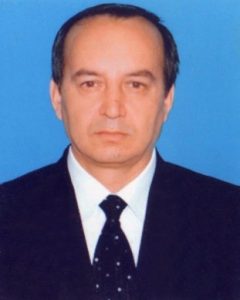 Doctor of Philology Yakubov Islomzhon Akhmedzhanovich was born on March 3, 1961 in the Khazarasp district of the Khorezm region. From 1968 to 1978 he studied at the secondary school number 17 of the Khazarasp district. Islomzhon Akhmedzhanovich Yokubov studied in 1978-1983 at the Faculty of Philology of Karakalpak State University in the Faculty of Uzbek Philology.

After graduating from Karakalpak State University, he worked as a teacher of the Uzbek language and literature in the 17th and 39th secondary schools of the Khazarasp district of the Khorezm region in 1983-1990.

Islamjon Akhmedzhanovich Yakubov was a graduate student at the Institute of Language and Literature of the Academy of Sciences of Uzbekistan in 1991-1993. In 1993 he defended his thesis on literary criticism of Atajon Hashim and received a doctorate in philological sciences.

In 1994-2002 he worked as a teacher, senior lecturer, associate professor of the Uzbek literature department at Urgench State University, and in 1998 received the title of senior lecturer. I. A. Yakubov studied full-time doctoral degree at the National University of Uzbekistan in 2002-2005.

He currently works at the Nizomysky Tashkent State Pedagogical University as the head of the department “Uzbek and Kazakh language”. More than 150 scientific works of the scientist were published in authoritative scientific journals of our republic and abroad. He is the author of almost 20 textbooks, textbooks and monographs.