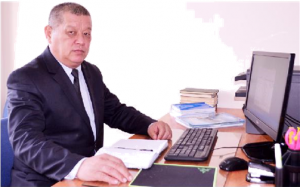 Berdimuratov Murat Karlybayevich, Candidate of Physical and Mathematical Sciences, Associate Professor. Born on February 10, 1963 in Nukus. He graduated from the Nukus State University in 1989. In the period from 1992 to 1997 he was engaged in research work in the city of Kiev. He defended his  thesis on the topic “Modeling and optimization in salt-transfer systems” in 1997.